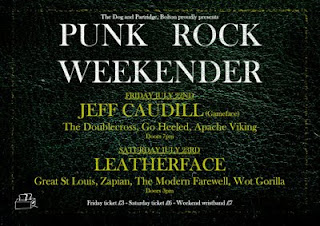 What a year it’s been for gigs at the Dog this year. For those who thought it was all down hill from Dogstock here’s a couple of fingers waved in your general direction.

This weekend sees the happening of the Punk Rock Weekender. Here’s a quick guide to get your juices flowing:

Jeff Caudill
It’s not the destination, it’s the journey (or so Jeff’s website says). Not many artists stay relevant to their fan-base over a sustained period of time, but Californian singer-songwriter, Jeff Caudill, is one such rarity. Shooting to prominence with punk-pop band, Gameface, in the early 1990s, his irrepressible knack for a memorable hook and melody quickly established a dedicated following right through to when they finally abandoned the tourbus in 2003. 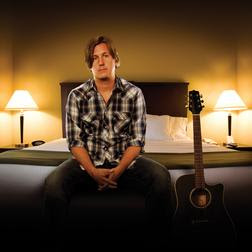 It wasn’t long before Caudill reappeared, acoustic guitar in hand. Rather than signalling a new direction, the new, earthier sound was a logical progression from his punk roots. The release of acclaimed debut album, ‘Here’s What You Should Do’, confirmed this was an artist equally comfortable mixing up pop, indie and alt-country to create something fresh.

Still wearing his heart on his sleeve and fiercely independent, the release of new album, ‘Try to be Here’ promises to win over a new raft of fans, as well as provide a convenient jumping on point for any who may have lapsed.

The Doublecross
Jon Greenwood is one of the nicest guys I’ve ever met. I’d leave it at that but that wouldn’t give you much of an idea of what The Doublecross sounds like. “…..Springsteen, Hot Water Music, Evan Dando and Walter Shttp://www.blogger.com/img/blank.gifchriefels influence his gruff, plaid coated acoustic tunes.” He’s a man so respected, so loved around the Cardiff area that he had more than 20 of Wales’ finest musicians play on his album Things Will Never Change.

Go to his website or search out his ablum on spotify (The Doublecross – Things Will Never Change) it’s a great piece of work.

Go Heeled
This two have been well Dogged and I’m pleased as fuck they’re back battering out their “sad songs that you can dance too”. Peter & Philip would like you to listen to their songs, go to their shows & buy them a drink! I would suggest this too.

Apache Viking
AV (I’m to lazy to write their name – HOW COOL AM I?) were formed after a drink spillage and haven’t looked back since. I like this about them.

£3 in and Doors at 7pm.
http://www.blogger.com/img/blank.gif
SATURDAY NIGHT

I’ve already waxed about these boys. I love em and I know you do too. Monster monster gig as Eric Hall would probably say. He’s right too.

“One of the greatest, most underrated punk bands.”

The Great St Louis
Bolton’s own, Bolton’s finest. John Dagger and the boys http://www.blogger.com/img/blank.gifreturn to the fray after what feels like aeons off.
GSL released their debut in 2006 to much deserved acclaim. Powerful songs stuffed full of hooks - all ferocious power and melody – that put them in mind of Social Distortion or, you might have guessed it, Leatherface. It was followed up by last years ‘In your own time’ giving the Great St one of the most envied arsenal of songs this side of the Atlantic.

There return sees the reformation of the original line up

Great St Louis - No Change (live at the Dog)

Zapian
Taking their name from a particularly agreeable, if highly volatile, brand of Spanish cider, Zapiain first came into being in the summer of 2006. Based largely in the small towns on the South side of Leeds (Dewsbury mainly), they rose from the ashes of numerous local bands.

Zapiain trawled the local gig scene until 2010 when they decided, after a couple of singles and EPs, to finally record their first full length album in the middle of the 2010 world cup. Luckily for them England did rubbish, resulting in the magnificent debut Jibberjabber. Blending melodic hook filled punk and heartfelt lyrics with intricate distorted guitars, an aggressive rhythm section and gravelly, soulful vocals, Jibberjabber ensured that the band could finally have a rest from releasing their own records and let someone else take the reigns.

Have a listen. Really: http://www.bombedout.com/bands/zapiain

The Modern Farewell
Look who hasn’t gone home yet! Jon Greenwood’s second appearance at the Weekender is with his other band The Modern Farewell. Some fucking great straight down the line welsh punk rock. Enough words, check this lot out! Free download too:

Formed in late 2008, they’ve performed regular shows both alone and alongside the likes of Wild Beasts, Lightspeed Champion, 65 Days of Static, The Get Up Kids & Tubelord.

In August 2010 the band performed on the BBC Introducing stage at Reading and Leeds festival.

What does this all mean? It means this

£6 in Doors are at 4pm (tickets available from the Dog now!)

Weekend wristbands are available from behind the bar for the princely sum of £7!!!
Posted by The Dog and Partridge at 13:01