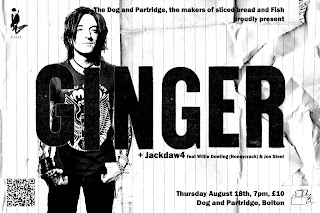 As a 16 year old my bedroom wall was adorned with 3 massive posters (it was only a small room) – a live pic of Mike Patton, the cover of Troublegum and a pic of Ginger and Danny McCormack from the Wildhearts - the one where Gingers wearing the ‘Fucker’ t-shirt. I think Kerrang! gave it away. You might know it.
It’s now late April/early May 2011 and the Dog is still shaking after Hamell on Trial’s brilliant recent performance, Neil and I are talking about Dogstock and future big gigs.
“Fish is trying to book Ginger.” 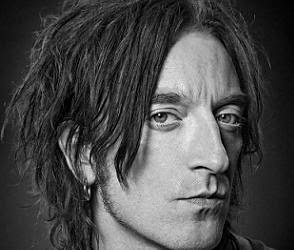 I let out a giggle. No chance I thought. He’d be too expensive and he wouldn’t want to play our little venue. No way.
Monday August 15th and the Ginger gig at the Dog has all but sold out.
It’s on Thursday.
3 days away.
This has followed 2 weeks of pure stress due to it dawning on Fish, Neil and myself that we were really punching above our weight. Those two were pulling their hair out. I stroked my beard.
All the worry is now behind us and everything has finally fallen into place. Even the weather looks like it might do us a favour. Yep. I said it.
It really is a fucking buzz to have a gentlemen play our gaff who has written some of the finest rock songs I’ve ever clapped ears on. Between me and my mates James and Pat we must have seen the Wildhearts near 50 times. This, however, is going to be very special. The best of the lot.
With people travelling from as far as Aberdeen it’s obviously not just me who thinks this is going to be very special.
The bonus of Willie Dowling supporting just makes it all the better.
It’ll probably be best not to talk to me Thursday night as I’ll be too busy pinching myself. And then singing along. A lot.
What a year of gigs we’ve had and this might just top the lot.
See you in a few days people.
ml (excited)
Ginger plays the Dog on Thursday August 18th, Doors 7pm, £10
Posted by The Dog and Partridge at 12:24