THE DOG WITH 9 LIVES (NEIL AND TERRY ANNIVERSARY SPECIAL), THIS FRIDAY AND SATURDAY AT THE DOG! DETAILS RIGHT AT THE BOTTOM OF THIS LONG LONG POST.

Have you read ‘The Dice Man’? No? A guy takes decision making away from logic and reason and puts it wholly in the hands of chance – in this case the roll of a dice.

Funny that.
I wouldn’t say that things were running smoothly when Angus’ business partner screwed him over but the Dog always has had a habit of limping along when other lesser establishments would, and have, laid down and died. Things really weren’t running very smoothly though and, lets be honest, after Mr Crompton was “dropped in it” the general consensus was that was that. 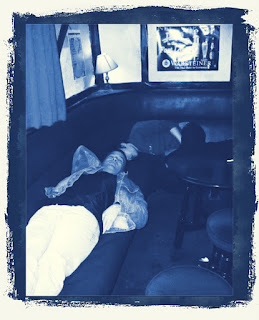 Neil Piper had previous at the Railway in Bromley Cross. He’d been running the bar at the Dog for 18 months when all this was occurring and had grown to like the shabby little bar and its regulars - he wasn’t prepared to see it close. Terry Fletcher agreed. T was prepared to stump up a fair wedge of cash to put towards buying the pub. But this is a big step. Should they go through with it?
Weeks of deep thought and soul searching were going to be avoided by taking their decision out of their hands. The future of the Dog and Partridge would be decided at the toss of a coin.
Heads was the call and Neil and Terry bought the pub the next day.
Funny that.
It’s been quite a ride.
If you went back in time to the Dog in '02/'03 it’d be familiar but not familiar at all. Always different, always the same. The pool table is a thing of the past, the pub is no longer a hot box of smoke and the yard is, well, inhabitable.
Ah the yard! Seven blokes, most with cigs pointing out of corner of mouths, trying so desperately hard to push a caravan up the incline and out onto the street. I wish someone would have filmed it. Come to think of it, there was a fridge out there too! Along with some remnants of some long forgotten Dogstock. What was a jungle has now been transformed into Bolton’s only purpose built outdoor live music space. And what a time it’s had! The Get Up Kids, Leatherface, some blinding SGG nights, Ginger Wildheart – some memories that’ll last for years. However please remember: ‘Don’t Be A Dick’ 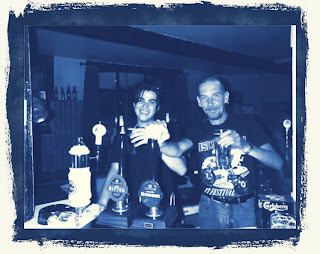 Of course it’s not only huge headline acts that grace the place. The Dog has always been a big supporter of local bands and local talent in general. It’s something that isn’t forgotten by the bands themselves with many who tour and charge large sums to play regularly returning to play i) usually for free and ii) at the drop of a hat (and hats get dropped let me tell you).
One of the biggest boosts the local music scene happened with the advent of the Bolton Music Collective which had it first meeting in a smoke filled back room of the pub in late 2003. Most Bolton bands, local music luminaries and an assortment of hanger-oners and weirdos were in the same room for the first time. Regular meetings were held, attendances grew, bank account/left handed cheque book was achieved and in no time gigs were being played everywhere around the town. This sudden surge woke the council up and with Paul ‘Yarkie’ Dean at the helm the first Bolton Music showcase was held at the Albert Hall in the summer of 2004. The success of this was repeated again in ’05 with 2006 seeing Leverhulme Park seeing some action. 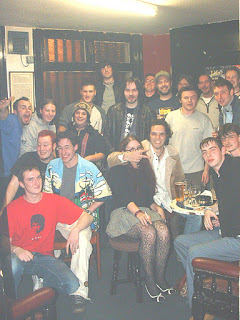 Over time the force of the BMC waned, the legendary BMC forum (geniouse) started to gather dust and smell a bit but the ‘damage’ was done – the music scene was brought together and the music scene was vibrant with the Dog, as it started, at the centre of it all.
The natural replacement of the Bolton Music Showcase events has been Dogstock.
Dogstock predated the showcase and existed before Neil and Terry took the place over. Over the last few years it has REALLY flourished. The now 3 day fest takes pride of place around the second bank holiday in May. Over 700 people attended this years event making it one of the busiest and sort after mini festivals in the North West. 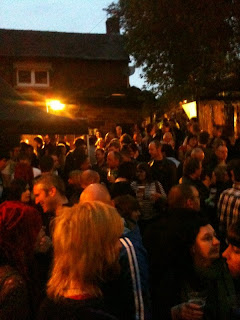 But the stress! Frantic last minute meetings, bands dropping out at the last minute, “Where’s the fucking beer order?”, late night phone calls, fears that NOBODY will come, “Never EVER again”. It is, of course, always worth it.
When the bands aren’t playing we’re very lucky to have some a set of brilliant DJs to spin tunes that drag you up dancing. TRASH and Badvibes have been going from the early to mid 2000s with Liam, Fish, James and Kris joining after that. The music policy is varied and pretty much anything goes. But not everything as a few have found out to their cost. It happens very rarely but if Neil doesn’t like what’s ‘now playing’ he’ll pretty much go to every length to stop it. Welcome to Piper country. He is the law. 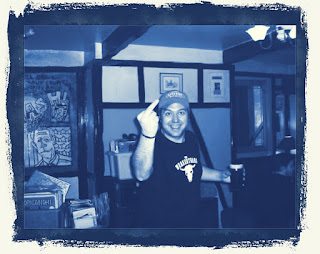 Two such examples: i) Daniel Brookes playing some tunes for the first time at the Dog. He sticks on a bit of Justin Timberlake. The next minute we’re plunged into darkness as Neil has cut the power at the fusebox. Power returns when an agreement has been struck that the offending song will not continue to be played.
ii) Ivan decides to chance his arm and stick on the latest Girls Aloud. The CD promptly is wrestled from the tray, taken into the kitchen and put in the microwave for 2 minutes.
There’s SO much more but I’m becoming aware that I’m going on. There’s not time to mention Robbo’s quizzes. I won a minute behind the bar which was unfortunately cut short as I went straight for the till. No mention of the Saturday afternoon club although Guy’s ‘films’ do shed some light on this.
No mention of the rotation of lodgers (Kim, Whitter, Si, JC Crilly, Warman and the ever present Biggs). Indeed no mention of the wonderful barstaff who have put up with our drunken demands over this near decade. Ah well. Whatever memories you have put below or keep to yourself. I’m gonna sign off with a bit of write up I did of the Neil and Terry’s 2nd year anniversary that I found on a livejournal somewhere. It’ll probably take some deciphering.
“So it goes - sure it went

Neil and t at the dog celebrated the 2nd anniversary in fine style. Yeah illegally putting on bands prolly not much of a clever move (beautiful sentence construction) but it sure was a fun one.

It really was back to the old school. Playing in a pub (something we hardly ever do now) to a bunch of mates who, to be honest didn’t give a shit whether we were good bad or ugly. Usually all three……

We sidled into the d and p at 7. Just me and kim and lisa. that’s when I got my first Guinness.

Yes, my first of what was not to be my last.

I remember counting how many, a sure sign that you have had too many, when we hit 8. At this point the rest of the band were dribbing and drabbing in. the doors were to be locked at 9, keeping the mass in the pub and the stray and unfortunates well away. Usually at this point on a gig night talk would be of monitor levels and sound checkery non sense. Tonight though, this was pure in your face music. As raw as electrics can get. From the twatting arms of the guitarist through his choice of plank to the amp to your bleeding ears.

So the newds were first up. See em a coupla, but never really, um, listened. Should of done though. Finely crafted songs played to you will no frills. Top shit. Banged my head dancing though. Bastards! The sound clash continued with, and I use this term with added relish, metal titans displacement who really did blow a lot of people away that night. No the kinda stuff I’d listen too anymore but were immense (a compliment displacement axe wielder colin would latch onto us later that night). Fucking foisted upon us like a diet of molten lava and iron filings. More beer please. It still felt like a night out, well right up until the point some said that I should be onstage.

Playing a minions set these days can be a bit karaoke but considering I was concentrating on how to stay upright rather than on how to stay in tune and the innumerable other bollocks thought I have whilst spewing forth this ska filth, this was always gonna be much more that just another re-run.

I’ll level with you, I can’t really remember much, just a select few memories. Debuting two incredibly under rehearsed unfinished new songs (the witchdoctor rocked though), trying desperately in my addled state to dedicate something to neil and t and the fact that me ste tom and kim ended up playing ‘it came from the ska’ in the crowd. Fucking loved it. Brill.

Chillin out afterwards was bliss. Playing in your favourite drinking est. always makes that easier. We shared a coupla smokes upstairs with rose, biggs and neil and kimmy and I staggered home. I feel like shit but in a good way. Yes it is possible. Tonight, or yesterday should I say, made it possible.

Neil and terry, you knew anyways, but we salute you. Here’s to many more years doing bigger and better things. Oh yes.

M x”
Here’s to ten more years eh? We can but hope.
Oh shit! I’ve forgot to mention anything about the gig! Erm yeah. I’ll give you one line then a load of links: THIS IS ONE OF THE FINEST GIG LINE UPS OF THE YEAR. There.
FRIDAY
The Minions
Neuron No!
Pancho Ballard and the Banditos
SATURDAY
The Kiss Off
Kings of the Delmar
To The Bones
How good is that!? Free in too!
Cheers Neil and Terry and I’ll see you Friday. 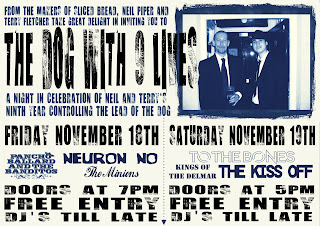 Posted by The Dog and Partridge at 05:12

Labels: Dog Partridge Bolton To The Bones The Minions Neuron No Pancho Ballard The Kiss Off Kings of the Delmar Bolton Music Collective