James and his brother have been fans of the Tansads for as long as I’ve known em. I’m remember James playing me ‘Up the Shirkers’ to me when I was younger. I wasn’t a fan. I probably didn’t think it was ‘punk’ enough or something. Wanker. Your music tastes broaden as you age. Thankfully.
Wiki, “The Tansads were an English band from Wigan, Greater Manchester who were active during the 1990s. Playing a mix of folk, punk and indie music they developed a strong following on the festival circuit and on the crusty/traveller scene but never managed to achieve a commercial breakthrough. Their ultimately unsuccessful career later became the subject of a book by former member Ed Jones.”


James brother Paul was eventually instrumental in cajoling the Tansads into reforming in 2010 reforming for 3 heady sold out nights at St Helens wonderful Citadel.
It wasn’t long after Merry Hell were born.
Before Paul awayed to a new life somewhere other than here (he misses Vimto, Chocolate and Morehouses bitter) he gave me a contact for Merry Hells manager/sorter outer Damian and we promptly met up at the Hamell on Trial to iron out the finer details of organising a MH gig.
This sorted gig took place six months ago. Positive reviews abounded and new fans made. MH played a 90 minutes set of new material from their just released record ‘Blink and you’ll miss it’ and some Tansads classics. By the end of a breathless version of ‘Up the Revolution’…..a mass singalong. Always leave em wanting more.
More?
Yes.
When?
This weekend.
I’m excited by their return. I’m catching up on lost time with MH and the Tansads. I’ll listen to ‘Up the Shirkers’ before I set out.
They’re bringing along friends too with Motorpike, Sidecarp and Pauline Blackburn coming along to support. Holding up the Bolton end are agit-poppers the Chris Evans Collective. It promises to be a night of top tunes and much joy.
£3 will gain you entry and if you’re not rushing to get a train or bus home we’ve got DJs that’ll get you boogying into tomorrow and a bar primed with drink for you to forget that you're dancing.
On top of all this, Paul’s back for his first taste of Merry Hell.
The moons have aligned. Make sure you don’t miss out.
STAGE TIMES
MOTORPIKE AND SIDECARP 2000-2030
CHRIS EVANS COLLECTIVE 2040-2110
PAULINE BLACKBURN 2120-2150
MERRY HELL 2200-2300 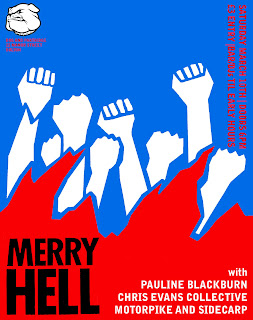 Posted by The Dog and Partridge at 23:58