1. Black Dynamite eh? Named after the film or something else?

Err... Dunno really ! We spent aaaaaggges trying to think of a name.
I've not actually seen the film yet but our drummer Mackle has, and I think it's quite possible that some of it's spirit is what inspired him to make the suggestion. Prior to this our best name ideas were 'The Darling Buds of Brian May' and 'Sinnead O'Conners Bald Head', so when Mackle eventually bellowed 'BLACK DYNAMITE!!!' from the corner of the room, we decided to go with it.

2. As a band you’ve not been around for long but I guess you’d have all known each other from the Harijan/Shadowcops days right?

Yeah we've known each other quite some time. Nick is the only new comer to the crowd, brought to us from a solitary post on the Wildhearts message board!
Know the guys well from recording most of the Shadowcops stuff 'back in the day'. The band actually came about when the band split up just before recording an EP with me. Mike and Mackle felt bad about leaving me in the lurch money-wise and decided to demo a few of the songs with me. The riffs I was hearing compelled me to pick up a guitar and start fret wangling on them... the rest is history !

3. It’s a beautiful noise Tim. I hear a plethora of wonderful bands in your stuff - Wildhearts, Terrorvision, Honeycrack, The Almighty – any of these close to the truth?

They certainly are! I guess a big part of the band is a nostaligic exercise for us. We have all come from 'punkier' band backgrounds, and discovered we had a mutual desire to have a go at playing more melodious stuff. Kicking out some tunes that remind us a bit of the 90s makes us all smile. We all like our 'punk' but having had our heads and ears largely immersed in that scene for a long time, it feels refreshing to be jamming some vocal harmonies, cheeky riffs and big solos. Although we are total punks and We don't give a fuck about anything obviously. Just make sure you get those m&m's arranged in the correct manner for our Dog gig please Matt. Cheers (Please make sure you buy our T-Shirts too. Thanks)

Very much looking forward to it! The 2 gigs we've done at the dog have been our favourite gigs as a band! Lovely lovely people. Got a couple of new songs in the set now, and there will be a CD/single available. Will be a few quid or summert! 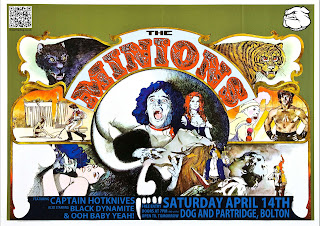 5. Some would know you from your Manchester studio Big Tone. Does having your own gaff help or hinder the recording processes of your own band?

Hmmm.. Well obviously it's handy. It does help as we have a permanent practice space in one of the live rooms and everything is there for when we want to record. I think the only hinderance is my own brain. I'm never happy with a mix and find it really hard mixing my own band because it never seems quite as big as I want it to be!! Although according to others the tracks sound pretty decent like.... 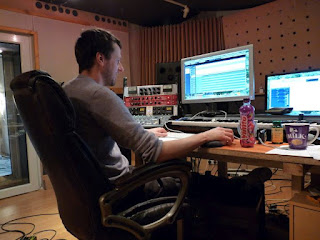 Ooer. Hmmm... well. We're pretty good at eating pizza, drinking lager (although sometimes I prefer an ale) and Mike has been able to successfully fool the facebook world into thinking he's Ant from Ant and Dec...
Music-wise I guess we (hopefully) do a good job of playing some catchy, badass rockin music with smooth harmonies and a sense of fun whilst being thoroughly alternative.

8. When shall we expect a Black Dynamite album? We’re all getting a little impatient.

Argh! Don't ask! Because I really don't know! We have a load of stuff recorded but I am the problem person in this equation as I really can't help picking and picking at them mix-wise. As well as this we're constantly writing and ever-so-very-slightly tweaking our musical identity. Probably won't get an album together until that process reaches a certain level of gravitas. Plus we need a string orchestra on one of the tracks.
We'll proabably release some more 'demo' type things soonish.

I actually don't think I have I'm afraid. Worth a watch?

10. I’d better get us a drink, what do you fancy?
Pint of bitter please my mate.
Posted by The Dog and Partridge at 05:36