Jeramiah Ferrari’s swift rise isn’t really shocking. 4 good looking talented lads with an ear for a tune, a good choice of cover and a feel good party vibe when playing live – it’d be harder to fuck up. 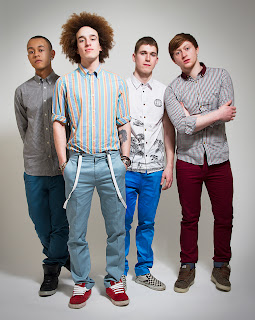 Me and my mate James caught the end of a very early JF performance at Old Isaacs in our town of Atherton. They were polishing off a set of covers playing to a few of their mates. They were sickeningly young. Me and James sat out back and drunk our tepid ales all grim and sweaty after a gig of our own – we felt old.

Fast forward a few years and I booked em to play the Dog with this vague memory in the back of my mind. They were on with their friends and sparring partners The Lottery Winners. The Dog was busy but not bursting and JF dominated from their first to their last. This paved the way for Dogstock.

Dogstock 2011 was one of the very best and many peoples favourite band was second night headliners Jeramiah Ferrari. Near the end of their set it started to rain but that only seemed to spur the crowd to dance harder. Their return at Dogstock 2012 saw a tougher, feistier set and knocked the crowd off their feet (metaphorical). Also at Dogstock 2012 myself and Neil met the lads newly acquired manager. Eh up. It starts.

Sure enough, one of their last gigs was the MEN arena and they’re just about to embark on a full UK tour. Nice of em to come back then really innit!?

They’re will be support but they aren’t confirmed yet. Hold. Your. Horses.

If you're unfamiliar with em, check out the below video filmed at a council house in Manchester.

Posted by The Dog and Partridge at 14:46