Looming into vision like a big loomy thing - February

We’re through the first month. Yeah we are. 2014. The future. You’re in it. No hover boards/cars in the sky/robotic prostitutes. Feel ripped off? Well don’t. Take a look on your internet machine and see the vast array of bands and fun we have in February.

MASSIVE FEBRUARY (rather ironic for the shortest month) will blow your mind and live long in what's left of it. Don’t believe me? We’ll
click the video below and read out the information in your best Mark Goodyear voice.

SATURDAY FEBRUARY 1ST is Nik Bryants birthday. He wants to invite you down to watch Jet Pack and The Arcadia Verses You should go and get the chap a drink as he’s a stand-up guy and he’s put this night on just for you. And him. Obviously.

SATURDAY FEBRUARY 8TH of this massive month is filled with Arse. Arse Full Of Chips that is. With their last performance at the Dog the Bum boys (as they’re not known) are sure to want it make live long in the memory. Support is from trailer park mong Cleetus Labia. Tunes after this spun by the marvellous Neil Kell.

TUESDAY FEBRUARY 11TH is a day in the middle of the week. Not a weekend day. This much is true. To celebrate this particular Tuesday Brenda Cockle rolls out one her legendary quizzes. This seminal night celebrates knowledge like no other quiz. Come down and enter. Let the question roll around your brain mouth like a good merlot. Stroke your mind sword. Vomit out the correct answer. Great sexy fun. £1 to enter.

SATURDAY FEBRUARY 15TH just makes these 28 days bigger. Dog favourite Suburban Sons headline your Saturday night action. Mike Chadwick, who is in two bands, purposefully forgets to tell them about the gig and plays on his own! Shocking (but great!)

WEDNESDAY FEBRUARY 19TH : Matt Pryor is an American musician who lives in Lawrence, Kansas. He formed, along with friends, indie rock group The Get Up Kids and they became superstars. The Get Up Kids astonishingly played our pokey little venue a few years back and Matty boy (as I’m sure he loves being called) was so taken with our place he made sure he got in a date on his latest solo tour promoting his new album, ‘Wrist Slitter’.

Just think about that for a mo.

American dude from big band makers sure he plays the Dog on his latest tour.

Now, even if you don’t like him or his band you gotta admit this is a bit of a boon.  A special night. If you are a fan of all things Pryor then you’re officially allowed to start creaming. Support is from Alison Weiss and tickets/PayPal receipts are £9.50 and can be bought here WARNING – THEY ARE SELLING FAST : http://underthebridge.bigcartel.com/product/utb-43-matt-pryor-allison-weiss-more-at-the-dog-and-partridge-bolton

Ready for another BOOM!?

SATURDAY FEBRUARY 22ND :  Getting Leatherface to play the Dog a coupla years back was a buzz unlike no other. It was a great night. This will be up there with that.

For those who might be unaware (most probably), HDQ ended up providing 75% of Leatherface. They were one of the first UK bands to really take on the influence of American bands that were adding melody to a hardcore style of punk without attempting to keep up with the speedier bands, and they managed to do this successfully over a period of years, frequently touring the UK and Europe. Fresh off the heels of the band’s first record in 23 years, guess where they’re playing? BOOM!

Co-headlining and making a massive smile appear on my face is Southport. My love of the band Snuff is well known and Southport features original Snuff guitarist Simon Wells. The recent Southport record ‘Southern Soul’ is a completely brilliant and it’s going to be a real privilege watching them in the flesh.

Support for these two comes from Stay Clean Jolene – their first Dog gig, Holiday and the Doublecross. £5 on the door. A quid a band. Not bad at all. 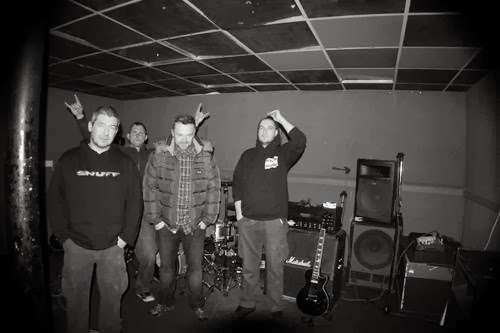 And that’s MASSIVE FEBRUARY for you. We may as well shut down after this. We probably won’t top it. Although it’ll be fun trying.

Don’t forget Dog Sunday every Sunday after these shows. Brap.
Posted by The Dog and Partridge at 06:26 No comments:

Opening the Arse one last time

Love 'em, loath 'em or something else the Arse has probably touched your life at some point in these last 3 years.They've offended, terrified and made our night in equal measure in this time so we've decided to offer them the chance to do all three ONE LAST TIME before they fuck off and do something else.Cleetus Labia makes his way out of the trailer park in support.Free and MUCH fun to be had.

DJs and tunes forever afterwards.
Posted by The Dog and Partridge at 14:04 No comments: