The Dog Will Rise Again


Trailer for the short film Steven Hutchinson is making about the Dog as we are. Spread the word.

See you on Friday!
Posted by The Dog and Partridge at 13:40 4 comments:

Sunday 28th Decenber – Dog Walk For The Dog Start @ Bromley Cross Railway Car Park, round part way of The Jumbles, past Turton Tower and through the Cinder Path, stop at the Chetham Arms for drinks and let our dogs have a rest. After that onto the final stop the Strawberry Duck.
This route is approx. 4.5 Miles.
EVENT

We are writing to you in light of recent events surrounding one of your properties, The Dog And Partridge in Bolton.

As you are well aware, this thriving cultural landmark has been closed for several weeks now, due to the bizarre actions of one man, who chose to drive a Land Rover at full speed through the wall of the pub.  It is only by sheer coincidence that the car did not end the lives of the three people who had just stepped outside moments before.  One of these, landlord Neil Piper, is now homeless, jobless and facing bankruptcy – and looks set to remain so for the foreseeable future.

The tightly knit, sizeable community of the Dog and Partridge, as well as our brothers and sisters at Blind Tiger, the Alma, and all the bands all over the world who have travelled time and  again to play at this well-respected venue, wish to thank you, Bluemantle.  Your response to Neil’s plight was immediate, and very much in keeping with the actions of a company who care about the people living on the land you own.  You have shown every sign that you are as good as your word when you say that returning the pub to its’ previous state is your priority.

But what if we went a bit further?
You bought the Dog and Partridge (outbidding Neil and his business partner, Terry, in the process) in order to build ‘Church Wharf’, a regenerative development designed to bring new life to our town.

Due to various unavoidable economic factors, this development stalled.  No-one knows what the future holds for this 13 acre swathe of town centre.  That is up to you.

But you know what would look nice in that spot?  An amazing music venue.  A place where people had met their future spouses.  A place where people had experienced events which had changed them forever.  A place that has survived the test of time as a refuge, a sanctuary, a home for people, music, arts, creativity.  All the things that people need to stay sane.  All the things that you’ll remember when you’re old and multiplex cinemas and retail units have been torn down, and built again, and torn down again.

Your £100,000 rebuild of the damaged wall will make the structure of the pub the strongest it has ever been.  That money will be wasted if we don’t safeguard the successful business that keeps that structure full of people.  On top of the costs of maintaining a business that currently brings in nothing, due to it’s closure, there are likely to be debates between the various insurance companies involved that will drag this situation on indefinitely.  All the while, the building will fall into disrepair and ruin.

£100,000.  If you double that figure, the Dog And Partridge could become your flagship. A truly unique space in Bolton that is needed now more than ever by its loyal customer base and the more more casual consumers. This wouldn't be buying the goodwill of the people of Bolton.  It would be showing that you understand the needs of the community for which you wish to develop things.

Also, needless to say, it might make you a bit of cash in the long run.

Posted by The Dog and Partridge at 08:24 No comments:

A word from the #dogrefugees


"That's really awful news. Let us know what we can do to help".

This has been the overwhelming response to recent events at the Dog and it is massively appreciated. It's time to provide an answer.

People have already provided cars and strong arms to shift things at short notice and given up parts (or in one case, all) of their homes for storage and accommodation. Other pubs, bars and venues have proven that it's not just about business by relocating gigs and setting up fundraising events and the Bolton News has helped to keep this issue in the public eye. Hugs, beers and someone to talk to have all been provided to help deal with the inevitable emotional fallout from near death, homelessness, job loss and missing our favourite place terribly. The people of the Dog and Partridge have shown that they are genuinely a family and it's been awesome. If you're reading this, the chances are that you are awesome. Thanks for being awesome. 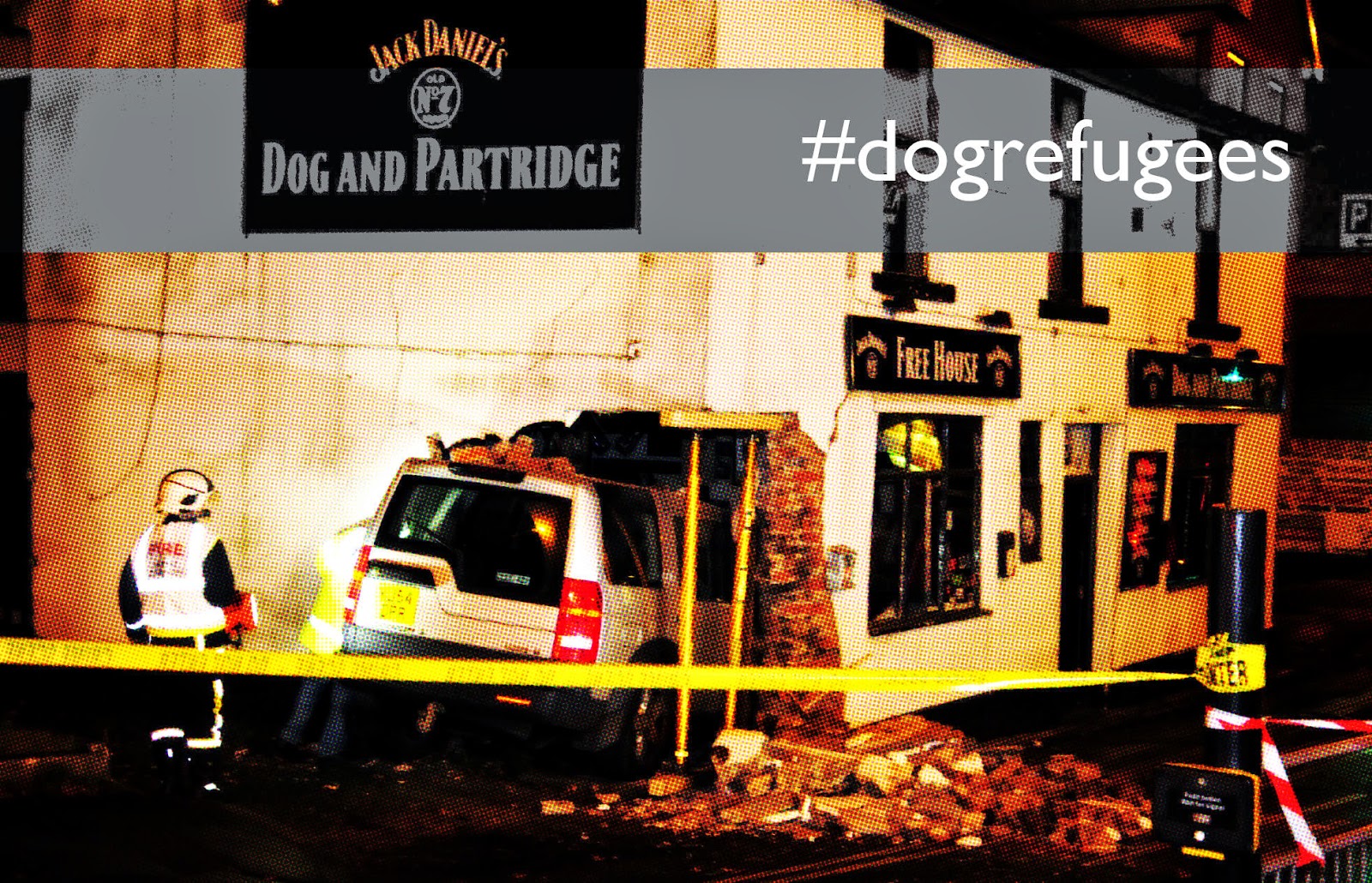 So what are our aims now?

We've talked and thought about this a lot, but the general consensus is that Dan (Dog Sunday) nailed it from the off:

"To help rebuild and preserve one of Bolton's oldest/most famous/most valuable cultural landmarks, to provide support, shelter and sustenance for those whose home and livelihoods have been afflicted, and to ensure the future growth of creativity and beautiful music, in a town which sometimes struggles to realise its own worth".

If you agree with these aims and want to contribute, you can do so by attending one of the fundraising events planned or just by donating. An account exists where money will be kept until needed – it’s the old Bolton Music Collective account, set up as a “community interest” account and therefore won’t be in anyone’s personal account. It seemed to fit the bill better than JustGiving, Kickstarter or PayPal, and after all, this is a collective response to something affecting music in Bolton.

We are assured that publishing these details are safe – lots of charities post the same details on their websites so that people can donate, it’s pretty standard.

So, come to the gigs and chuck some money in the buckets or online. When it comes to deciding how to spend any money, we’ll just read Dan’s words again. 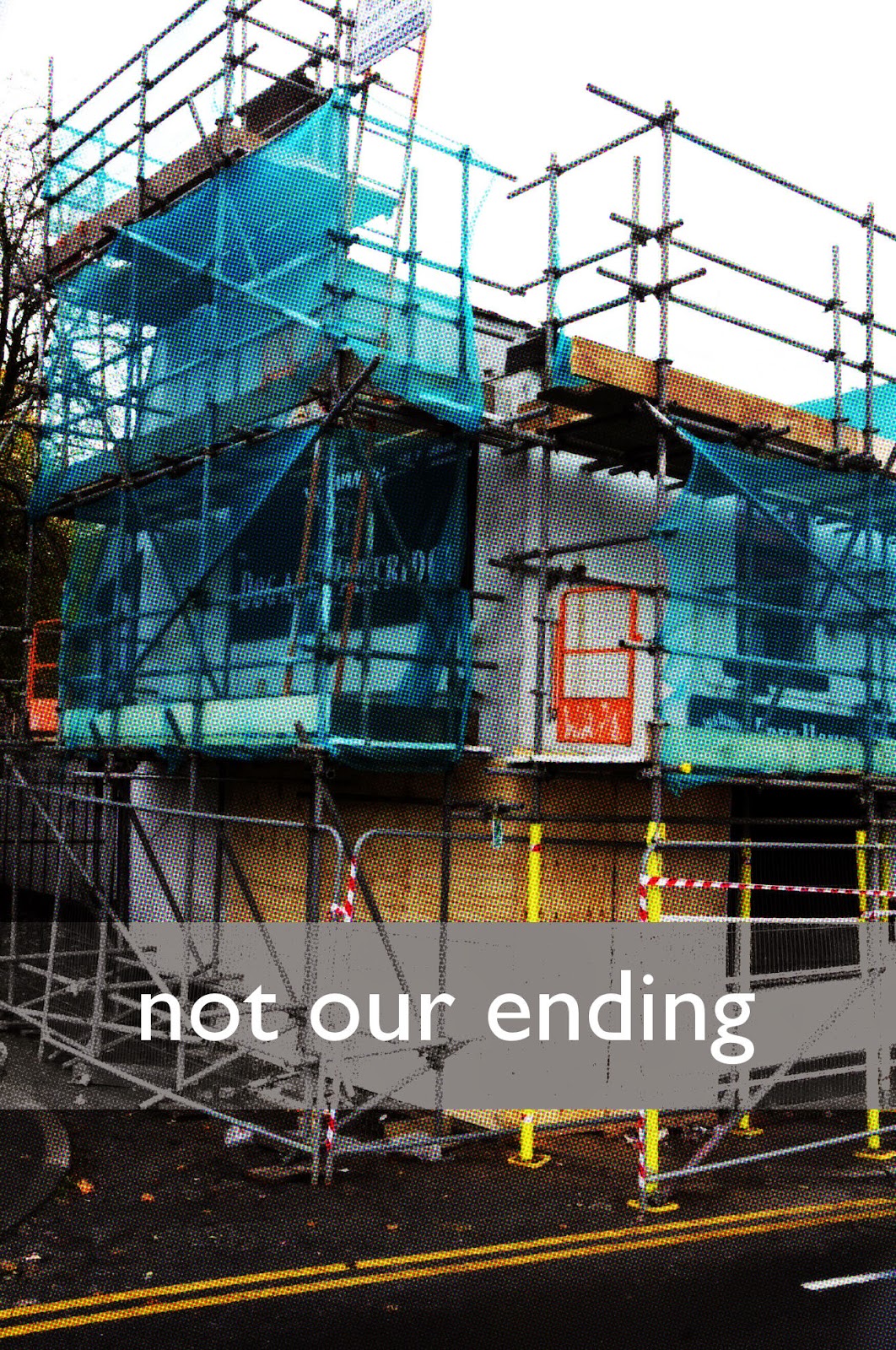 As things stand, the events are:-

Please share this blog post so that people who want to help can easily do so. More info at www.facebook.com/events/560623054081189/ or find “Neil Leonard” on Facebook, @thedogpub and #dogrefugees 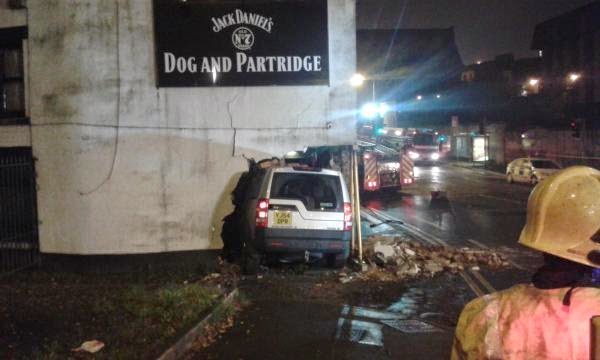 Good evening folks. It’s been quite a week.
For those who have been living under a rock/in Farnworth: at around 5.30pm on Wednesday October 29th a 4x4 ploughed its merry way through the far vault wall of our esteemed establishment. Fortunately only three people were in the pub at the time - Neil, Lou and our new barman Tim. A cigarette saved their lives. Only 20 seconds were between them leaving the vault to smoke and the car smashing through the wall. The four brick deep wall. Both Lou and Neil were sat in the seats the vehicle crushed. Smoking might kill but in this case it saved.

Even though our building is badly wounded not a minute passes without us being all too aware that it could have been so much worse.
The driver was unharmed and well looked after by all until he tried to do a runner. Staff from surrounding pubs helped to restrain the individual until the police took him away. The building was inspected by the fire brigade, the electricity was turned off and the Dog was, and remains, closed.

Over the next few days the Dog showed what a wonderful and vast family it has. In the intervening days between the crash and now, you have manned cars and fired up vans helping take all items of value from us and making sure it is stored safely away. There is no thank you card big enough. 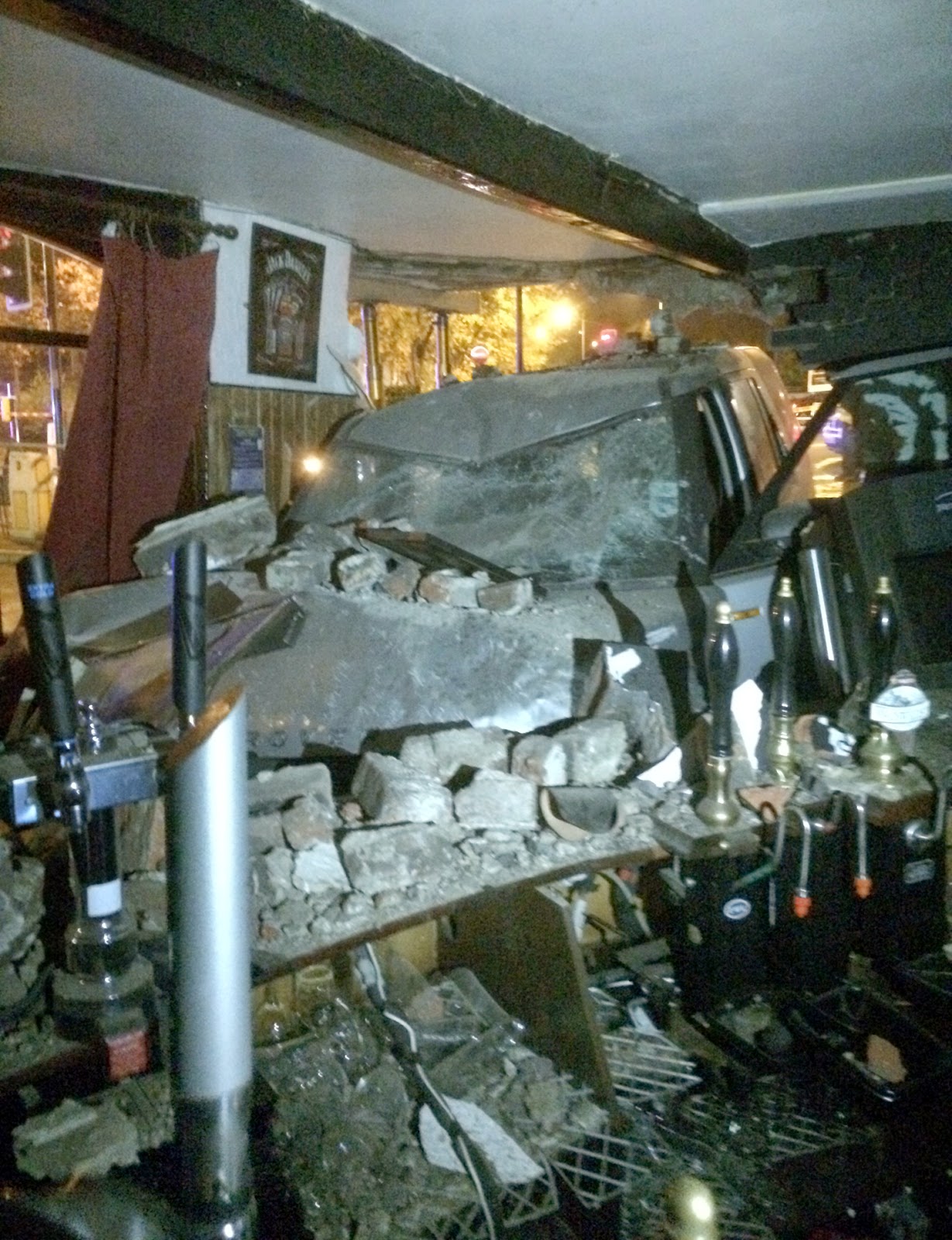 Families don’t have to be related.

If the original incident wasn’t enough, Halloween brought a new twist. Thieves broke in and robbed stock and tools from the cellar trying to take the big gazebo on the way out. We were all understandably crestfallen. The end of our wit was in sight. It was a fucking hammer blow.

The Bolton News did a thoughtful piece (as they did on the original incident) on the robbery and most – most – of the comments galvanized us. This was needed as we knew that a day was looming where the building was to be judged. Was this the end of the Dog?

That day was today. Bluemantle, who own pretty much all of Bank St/Manor St, sent their building inspector down and their view is that the Dog is “salvageable”. Don’t get the flags out yet though. We still wait on the property owners view. But even with this in mind, things are looking up. 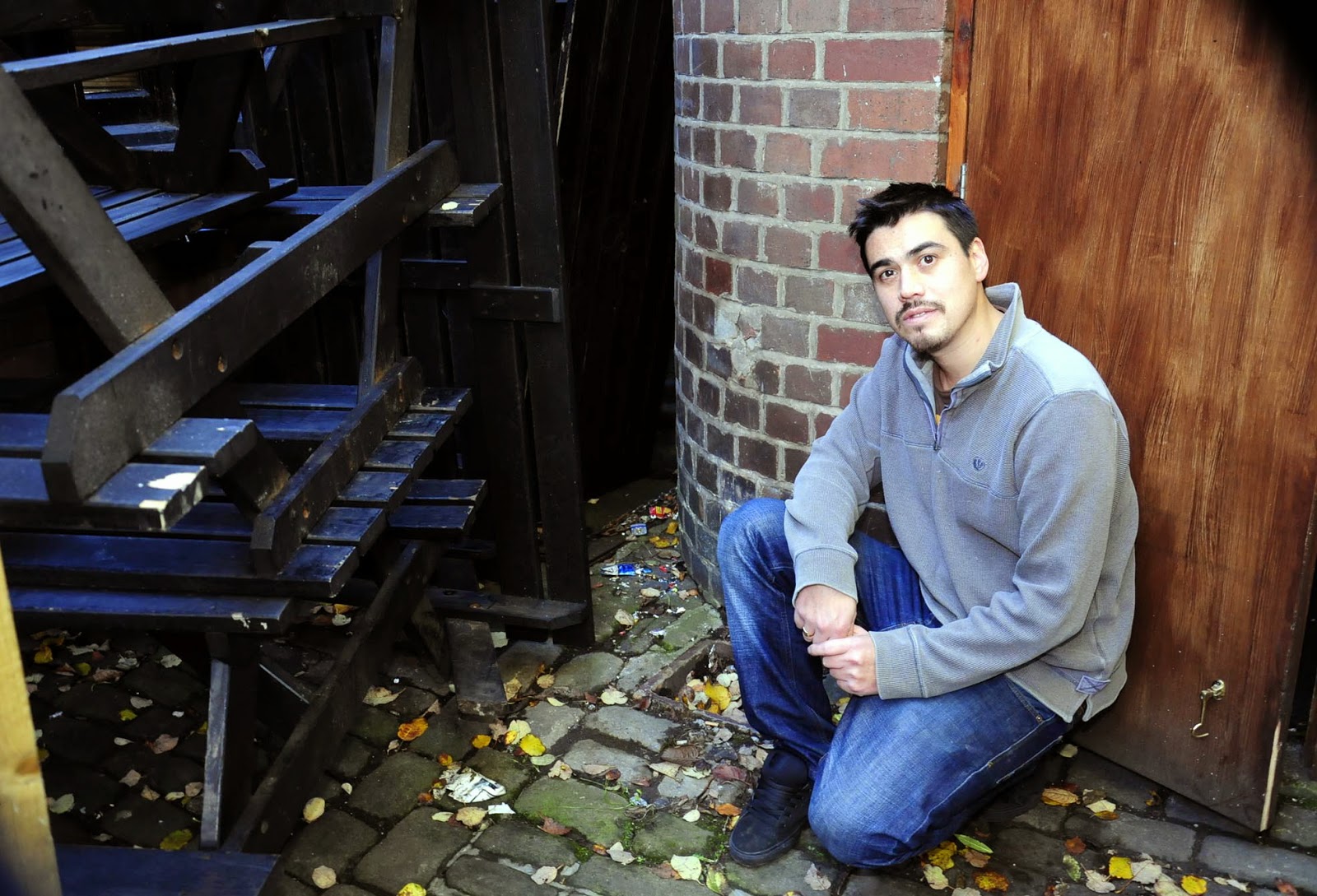 The long and the short of it is this, we’re gonna be shut for at least 2 months. The gigs we have booked will be moved (if possible) and we will be holding various fundraising events around and about the north west to raise whatever money is needed for the shortfall the insurance will leave. If any of this changes, you’ll be the first to know.

The Dog has stood (sort of) proudly at the corner of Manor Street and Folds Road for well over 100 years. It has grown and slightly changed in that period. It’s never been the most aesthetically pleasing of places but that has never been its point. It’s served its time as a bikers pub, a gay bar and more recently a musicians hang out and we’re very proud of its history of being on the peripheries – physically and metaphorically – of the usual Bolton centre fare.

For us, this is a special place. People have met, formed bands, fallen in love, got stinkingly drunk, pissed themselves, split bands up, fallen over, laughed like a drain, ended relationships and proposed between these four walls. I/we don’t want this to stop.

When we thought that our place was to be razed to the ground it hurt. Not because we haven’t been here before but because this time we were in a position where we could see a brighter future. It isn’t our choice to close.

This isn’t our full stop. 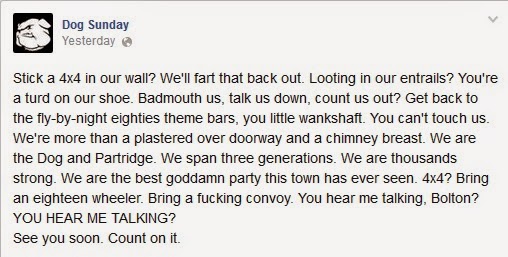