A Message From Neil


Hello friends. This is a message I was hoping I'd never have to write. The Dog and Partridge is to be demolished. I wanted to tell people when I knew the date of when this is going to happen. But the weight of this has grown too much and its ripping me apart.

The landlords of the pub has taken the decision to take down the building due to it not being economically viable. The landlords have looked at the damage that has been caused by the crash, break ins, the weather and the fact that the pub is an old building. They see it as a Pandora's box that when they start work on the building they will find more and more problems that have to be fixed. The refurbishment alone would cost tens of thousands on its own. The place it’s a wreck, throughout the whole building. The damage caused by the break-ins is huge, every door kicked in, nearly every window and frame broken. Her infrastructure ripped out. Even finding needles in what was once my bedroom. It takes a piece of me every time I walk through the door.

I'm still fighting my landlord, as well as the drivers insurance company, plus the council.  But the fight to keep the pub open is one I just can't do any more. I don't have any grounds to do it. At the end of the day it’s not my building. They bought the building 8 years ago with the aim to level the whole area. I've no idea if that's ever going to happen, probably not.

I've been trying to keep the doors open for the last twelve years. At times it’s been very hard, I've poured my heart and soul into the pub.  I had a lot of help throughout the years. I wouldn't dare to say that it was just down to me because the truth is that without the hard work and dedication from a lot of you we would not have made it this far.  I'm not going to name people in the huge fear of missing someone out. You know who you are and how much of yourselves you poured into the pub. From staff, organisers, bands, drinkers and friends made through other businesses. It takes a great crowd to make a great pub.

The point I knew I wanted to run the Dog and Partridge was during the first Dogstock. Angus needed to create a festival to raise enough money to keep the pub going. That's when I saw the pubs regulars’ band together and work ridiculously hard and over many hours for nothing but to keep their pub alive. That's when I knew this was the place for me.

People even now are rallying around me from the pub, those who helped clear the pub, the ones who are still looking after my stuff. Thank you so much. I cannot thank these good people enough. I hope one day I can repay this huge kindness that people have shown to me.

I grew up within the walls of the pub and I got to see a lot of other people do the same. I've seen people at the lowest, worst and at their greatest. It’s been an honour to be part of it and see the relationships, marriages and children that have come from people meeting at the pub. I've made some amazing life-long friends along the way. We brought bands from around the world and helped local musicians find a place to express themselves and grow. I'm proud to have been a part of that. I've always loved music but have never been able to play a thing.

My heart is broken of the thought of not standing behind the bar again. I've no idea what the future holds for me as at the moment I find it hard just to put one foot in front of the other. I'm currently suffering from depression but I'm working through it and will eventually sort myself out. I know I have a lot of good people around me.

Running a pub isn't just a job. It’s a way of life and becomes who you are. Other landlords will know this feeling well. I now have no idea who I am or what I should do with myself.

All I can now say is THANK YOU. Thank you for your support over the last 12 years. I hope other pubs get the same love and support that the Dog and Partridge has received. It’s a hard trade to work in now and they need people like you to make them stronger and better.

I'm hurt, pissed and I've got to find a new job and somewhere to call home.

Neil Piper, still just about landlord of the Dog and Partridge. 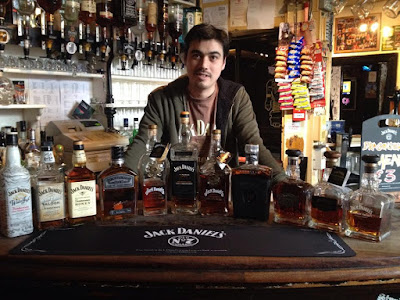 Posted by The Dog and Partridge at 03:35